The early dawn take of my waking muddler by a summer steelhead still reverberated in my mind though the explosion was over in the blink of an eye or 50 wing beats in the amazing life of a hummingbird. My heartbeat was just settling back to normal, and I began to see things again.

A shimmering glint caught my eye as I cast and stepped through lower Slide Riffle a few short years ago.

When you see something under water, you are never quite sure whether you are about to find buried treasure or another boot-smashed beer can. The flowing waters and current seams allow you mere fleeting glimpses through it, then the window into the underwater world disappears for long moments before re-appearing, although never exactly as before.
I waded out through the waving fronds of invasive elodea and over a small bright clump of gravel to see if there was indeed something bright and shiny out there, out deeper and further into the steady flow.

And there was! I could definitely see something metallic half submerged in the fine bright basaltic gravel. I was nearly waist deep in the pulsing current and so I was glad to have my wading staff to help push at the metal object. Something told me it was not an old can of beer.

Holy Salvage Master, it was a reel.

As my staff unearthed the reel, the current lifted and tumbled it downstream in the run but I made steady progress edging the reel towards the bank even as it moved downstream. Gradually the current yielded it grasp and bankward progress increased. Finally I figured the warming September air would dry my shirt sleeve if soaked by the deeper than expected grab of this unexpected river bounty. 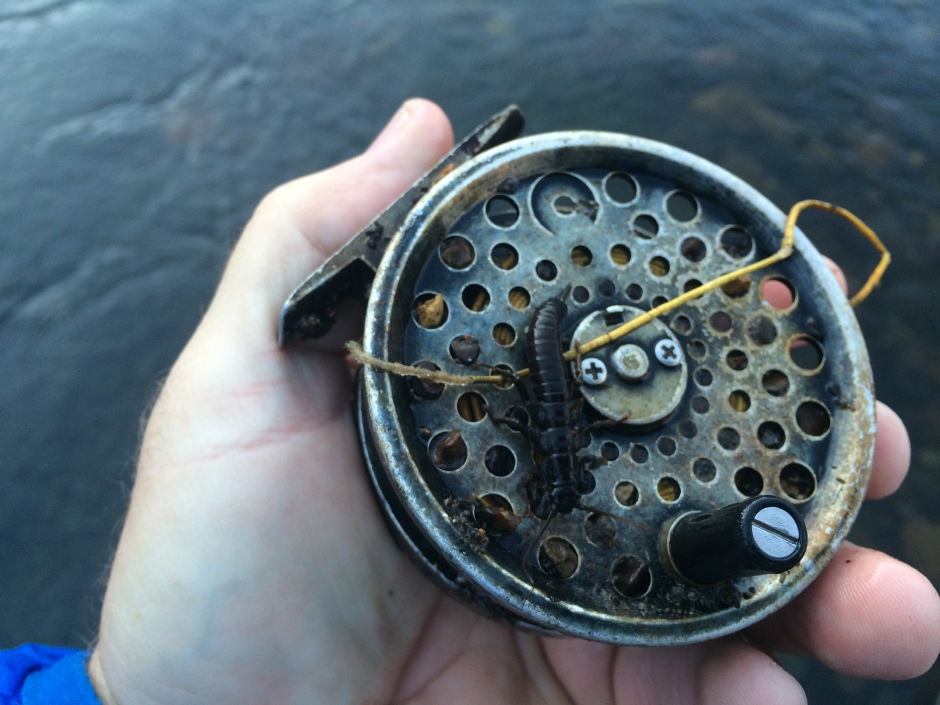 A Lamson reels trout reel. Likely a Number 3 though the insignia was missing. The flyline was cracked and growing multiple species of algae, and it housed a multitude of nymphs of many species – mayflies, caddis and one massive stonefly we later named Lester the Lamson Molester.

Each of the reel’s multiple spool holes was perfectly filled by a perfectly sized piece of gravel – the vented spool had sorted the gravels nicely.

I was pleased with my find, and i stuffed it in to my chest pack and waded back in the run, resuming my methodical and now melodious search for summer steelhead.
Slide Riffle has been a favorite of mine for many years, though it rarely has yielded a fish. I often do not fish it as its easy wading and distance from the bank makes it a very good run to send those who are not fans of the typical Deschutes River wade – full of slippery basalt, or those who have not given up their single-hand casting for the game-changing two handed rods. So I was very pleased with the morning as I had found an aggressive fish and a trout reel – and still had half the run to wade – casting and stepping through.
Not surprisingly, the remainder of the run held no further encounters and I ambled through rattlesnake country back to the Fitzpatrick Homestead – the riverside home to Roger Bachman and a group of his fans and friends and family. The new home on the Deschutes rose from the ashes of the old homestead and while the creature comforts inside are remarkable, the well-shaded porch is a master work by the architect and builder.

I plunked down on the bench after my morning fishing with strong coffee, a little treat and dug out my unearthed treasure from my chest pack. For once, all the small tools I carry in my flyfishing equipment bag came in quite handy as I began to reclaim the reel. I soaked it in a pan of water and was able to evict and subsequently release the multitude of nymphs who had been squatting inside the reel and the line. Gradually, the sand and gravel released their hold on the spool and housing allowing me to separate them and begin the cleaning and scrubbing of the slightly rusted inner parts.

Considering its burial, the reel cleaned up rather nicely. But the life of an adventurous fly reel is incomplete unless it visits the Grants Pass shop of Archuleta’s Reel Works, and after a phone call with Bill Archuleta, my Slide Riffle Lamson took the trip south for a truly complete servicing. I received the serviced reel and a new spool in time for the next spring trout season. I truly enjoyed the smooth working but well-worn patina of my “new” Lamson and It seemed happy to holding fresh backing and a new line for the river from whence it came.